The RiverWalk Phase II is a project undertaken as part of the RiverMills redevelopment, specifically, repurposing a rail line to a walking and biking trail extending from Grape Street to the perimeter of the former Uniroyal factory site. When complete, the RiverWalk will extend from the city center to the Deady Bridge along the Chicopee River. An initial RiverWalk plan inset (PDF) can be downloaded.

In 2010, the city contracted with Iron Horse Preservation Society to remove and manage off-site the rails and ties from the rail line which had been conveyed to the city as part of the resolution of the Facemate and Uniroyal ownership litigation. They also placed a hard pack surface which is suitable for walking on a temporary basis. IHPS has completed their work. 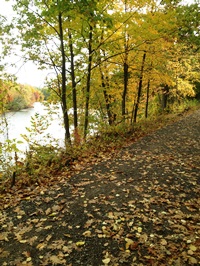 Funding Phase II
Through the U.S. Department of Transportation CMAQ funds (Congestion Mitigation Air Quality), administered by MassDOT, the city has hired Milone and MacBroom of Springfield, MA to design the 1.1-mile section of the RiverWalk referred to as Phase II. (Phase I was the portion from the city center to Grape Street). The Transportation Improvement Program for the pioneer valley has dedicated $1.643 million dollars for construction in the 2016 season. In order to stretch the budget and reuse materials where practicable, the city has reserved and stockpiled a large amount of granite blocks used in various places on the Facemate and Uniroyal properties. Some are very large and the design team believes there is enough to meet all the retaining wall material requirements for the remainder of the RiverWalk. 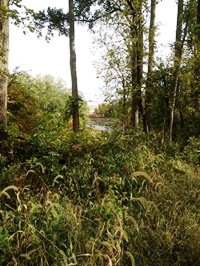 Public Hearings & Meetings
On January 17, 2014, the 25% plans were filed with MassDot, triggering state review and official public hearings. These hearings will be announced in a number of places including here and by email to those who have requested email notices.The City will hold various events for the public as design progresses. The first was an event announcing the completion of IHPS's work and the beginning of design by Milone & MacBroom. That was held October 16, 2012, at 10 a.m. on the North side of Front Street near the intersection with Ellerton Street. On June 12, 2013, the project was the subject of a neighborhood meeting at the Chicopee Public Library bordering on the RiverWalk. The meeting was well attended by interested abutters and residents and issues of slope stability and security were discussed.

The city held a pre-permitting meeting with the State DEP as part of the Brownfield Support Team initiative, allowing the City to get the input of state regulators prior to finishing the 25% design. The 25% plans will be finalized and an official public meeting will be scheduled this spring. The design firm expects to complete their design work in 2014.
Invasive Species
In September 2012, the Chicopee Conservation Committee approved the program presented by Milone and MacBroom to begin eradication of various invasive species. Treatment began on October 10, 2012, for Japanese Knotweed, one of the most stubborn and destructive of the invasive species along the RiverWalk. Another treatment occurred in the spring and treatments will continue 2 times per year for the foreseeable future. The invasive plants will be replaced with native, low maintenance vegetation which will also help stabilize the slopes. The Order of Conditions from the Conservation Commission is available in the documents and forms page of the Community Development webpage. 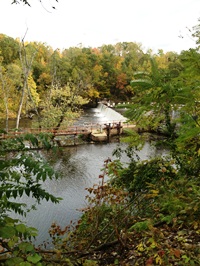 Point of Contact & Additional Information
The Community Development Department has designated Christopher Nolan, Project Manager, as the point of contact for issues related to design, construction and initial operation of the RiverWalk Phase II. He can be contacted at 413-594-1485 or cnolan@chicopeema.gov for questions or issues.

Documents related to the project will be posted on this site, and can be accessed from the Community Development Home Page in the documents and forms page.
Online Bill Pay
Notify Me®
Submit a Concern
Meeting Notifications
Citizen Alerts
[]